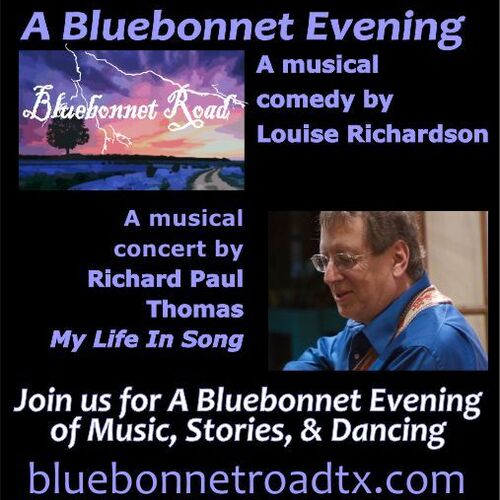 into one glorious evening of music, song, and dancing with proceeds going to the Salado Museum.

“Bluebonnet Road” is playwright Louise Richardson’s love letter to Central Texas, especially the area where my mother grew up. Details of her mother’s life, her family and the playwright’s life apprise the characters, songs and events portrayed in this musical.

Our story begins in April of 1979, when Olive Trundle is prodded by her older son, Noah, an Austin singer/songwriter, to fulfill the will of her late father. He has written a letter asking the family to scatter his ashes on the family farm. However, the river was dammed a few years ago and the farm may now be under water.

Joining them for the ride in Noah’s old pickup truck is Olive’s younger son, JoJo and JoJo’s girlfriend, Misty Strand. They arrive near the old farm and are required to borrow a friend’s pontoon boat and sail into the unknow in search of a landmark oak tree. They are caught in a raging storm and become stranded on an island in the rapidly rising river. When lightning damages the boat, they are forced to deal with one another. Secrets are revealed and each member of the troupe is compelled to adapt to an already highly charged and emotional situation.

Together, they face the challenge of finding a way to get home again.

An evening at RpT’s Library

Take a journey with this Salado songwriter as he shares the trials and tribulations of writing songs for you. Richard Paul Thomas (his friends call him RpT) is a free-thinking dreamer and Salado based singer songwriter with decades of love, life, and laughter to share. His songwriting spans a wide range of musical genres and emotional experiences ranging from lighthearted fun to challenging one's convictions about life and our place in the world. His writing and performance style encompasses elements of Folk, R&B, jazz, ballads, and good old rock n' roll. RpT's soulful voice ranges from thermal to edgy reflecting the musical influences of a lifetime. His thought-provoking lyrics speak to the heart and soul of the listener while thoroughly entertaining his audiences.

In this performance, Thomas takes the audience along on a journey telling the stories that inspired each of his compositions and brings out the meanings and emotions only a song can reveal. His song, Salado, is the official song of this historic town and has been featured in Tablerock’s Salado Legends for the past few decades.

Both performances are laced with music to dance to. And there is even a rumor that a dance contest is in the works.

Come join us for a night to remember! 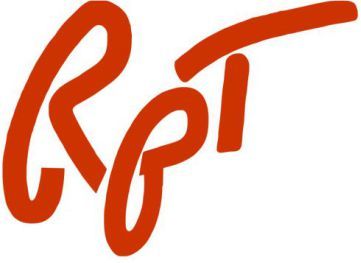